Sepsis can and does affect people of all ages. The very young (infants) and those who already have a chronic health problem or a compromised immune system are at higher risk of developing sepsis. But people who are aging, over 65 years old, particularly those who have health issues, are even more susceptible to sepsis than any other group. Adults age 65 years and older are 13 times more likely to be hospitalized with sepsis than adults younger than 65 and 63% of older adults 60 years and older are admitted to the ICU present with sepsis upon admission. Like strokes or heart attacks, sepsis is a medical emergency that requires rapid diagnosis and treatment.

Other findings specific to older adults include:

Sometimes incorrectly called blood poisoning, sepsis is the body’s often deadly response to infection or injury. Like strokes or heart attacks, sepsis is a medical emergency that requires rapid diagnosis and treatment.

How does sepsis occur in people who are aging? 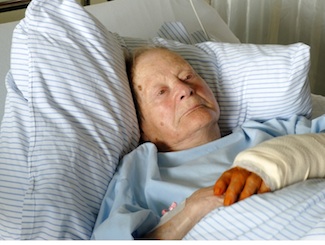 Researchers believe that as we go through the aging process, our immune system becomes less effective at fighting infections. This results in older people contracting more infections and they are more severe. Every infection we get means we have a risk of developing sepsis.

As well, as people age, they may develop chronic illnesses, such as diabetes, COPD, kidney disease, or heart failure. It’s not unusual to see someone with two or more chronic diseases.

Any type of infection can cause sepsis, from the flu to an infected bug bite, but the most common infections that trigger sepsis among older people are respiratory, such as pneumonia, or genitourinary, such as a urinary tract infection (UTI). In 2020, COVID-19 emerged as another strong risk factor for sepsis among older adults. Infections can also happen through infections in the mouth due to abscesses or other injuries, or skin sores, either from a simple skin tear because the skin may be dry or fragile, or a pressure injury from sitting in a wheelchair or lying in bed. There are many ways an infection can take hold.

It’s not always easy to spot infections among people who are aging. For example, symptoms of a UTI usually include the need to urinate frequently, a sense of urgency (you need to urinate immediately), not feeling as if you’ve emptied your bladder completely, burning or pain while urinating, and cloudy and foul smelling urine. For many seniors though, a change in mental status is the first sign of a UTI. They become confused or disoriented. So the infection could be present for quite a while before anyone notices. The same could happen with other infections, like pneumonia.

Since infections might not be obvious, if an older person becomes confused or behaves in an unusual manner, or if confusion or disorientation worsens, this could be a sign of an infection.

Signs of sepsis are generally the same among all adults, regardless of age:

Sepsis can move into severe sepsis quickly, so getting help and treatment as quickly as possible is vital.

Why is sepsis so serious for people who are aging?

Sepsis is a very serious illness for anyone at any age, but it can be particularly devastating for seniors. Older severe sepsis survivors are more than three times more likely to see a drop in cognitive (mental) abilities that can make it impossible for them to return to their previous living arrangements. This often results in admission into a chronic healthcare facility. As well, the risk of dying from severe sepsis or septic shock rises as you get older.

Sepsis doesn’t affect just the patient, researchers have discovered. The stress of having a family member who is so ill can take a toll on spouses or partners too, especially if they are the primary caregivers. For example, a study published in 2012 found that the wives of older sepsis survivors were at greater risk of developing depression, as much as three to four times the average. Depression can be very serious, affecting quality of life and even the ability to function independently.

Sepsis needs to be suspected and recognized as quickly as possible. It must be treated fast. The risk of death increases every hour of delayed treatment. 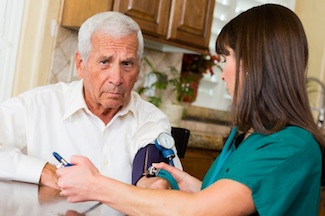 Treatment is with IV fluids and antibiotics. Other medications, such as those to raise blood pressure may be needed. If someone you know is admitted to an intensive care unit (ICU), you may see many machines used to monitor various things, such as body function (heart rate, blood pressure), medications and IV fluids that are being administered, and perhaps a ventilator to help the patient breathe.

The key to preventing sepsis is to prevent an infection, especially among the aging, from occurring in the first place. What can one say about their story? I remember being so hot and so cold and came to a point where I couldn’t even get out of bed. My body had lost control. My youngest daughter called my older daughter to see if she could come over because it stank in the house. The stench was me. My daughters saved my life literally. I don’t remember much and, I was told when I was taken to the hospital they asked me my name and I didn’t know it. The first thing I do remember is the PICC line coming out ... Read Full Story My beautiful mummy became ill on Thursday 23rd December 2021. My mummy and I were shopping on Tuesday 21st December, having a normal day like any other day to then receive a call from my mum’s neighbor on Thursday 23rd December saying he found mum on the floor. I came round and called the paramedics. They suspected mum had sepsis and wanted mum to go to hospital but she wouldn’t go but agreed to have IV antibiotics treatment at home. When the district nurses came they told me in the nicest but honest possible way treatment wasn’t an option as ... Read Full Story I was living in Los Angeles and had recently retired when my daughter on Long Island called and asked me to help with moving her and her family to L.A. I flew out and remember scratching my elbow the first day in N.Y.  Of course it healed right away. A month later we drove to L.A. and I felt feverish the last couple of days. When I got home I felt horrible and drove myself to the hospital. I had a 106° fever when I arrived. Put in emergency overnight and heard a nurse talking about amputation of my arm. ... Read Full Story

My mother started off in the hospital diagnosed with double pneumonia to spend a week there. (Sepsis and Pneumonia) She was so weak she could not stand up and she complained her whole body hurt. They sent her to a nursing home where she was there for a week and they neglected her the entire time she was there. Then after a week there, she went back to the hospital when they again diagnosed or with pneumonia and after a week sent her home. Said she was all clear. A week after being home she died in my arms, bleeding ... Read Full Story

Sepsis can and does affect people of all ages. The very young  (infants) and those who already have a chronic health problem or a compromised immune system are at higher risk of developing sepsis. But people who are aging, over 65 years old, particularly those who have health issues, are even more susceptible to sepsis than any other group. Adults age 65 years and older are 13 times more likely to be hospitalized with sepsis than adults younger than 65 and 63% of older adults 60 years and older are admitted to the ICU present with sepsis upon admission. Like strokes or heart attacks, sepsis is a medical emergency that requires rapid diagnosis and treatment.