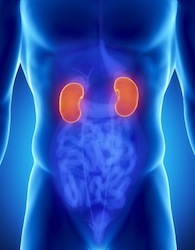 Most people are born with two kidneys. It is possible to live with one kidney, and many people do. In the lower back, these bean-shaped organs are each about the size of your fist.

The kidneys’ role is to filter the blood for waste products from what you eat and drink. The body keeps the nutrients, and the urine carries out the waste. After the kidney makes the urine, it flows down to the bladder to wait until you empty it by urinating.

Renal function is another term for kidney function.

How sepsis affects the kidneys

In sepsis and septic shock, your blood pressure drops dangerously low, affecting how the blood flows through your body. Because the blood can’t flow as quickly as it should, it can’t deliver the nutrients needed by the body’s tissues and organs. At the same time, the blood begins to clot within the blood vessels (called disseminated intravascular coagulation, or DIC), slowing down blood flow even more. Like strokes or heart attacks, sepsis is a medical emergency that requires rapid diagnosis and treatment.

Low blood pressure and DIC both contribute to the kidneys’ failure.

The fluid and toxin buildup in the body cause the signs that your kidneys are not working effectively. The most obvious sign is decreased urine output, although this isn’t always the case. Some people continue to produce urine, but lab tests will show that the urine is not normal.

Someone with acute kidney injury usually also looks swollen as the fluid accumulates in the body’s tissues. This swelling is called edema and can come on very quickly.

Other symptoms of acute kidney failure can include:

Urine and blood tests tell doctors how well your kidneys are functioning, so many samples are taken during diagnosis and treatment. For example, the doctors test for creatinine, which is created when muscle begins to break down. A BUN test (blood urea nitrogen) tells you if a substance called urea is building up in the blood. This is an indicator that the kidneys are not filtering waste properly.

When someone has sepsis or is in septic shock, the doctors work to treat the sepsis, the infection that caused the sepsis, and the damage that the sepsis has done, such as the kidney failure.

If the kidneys are not working efficiently enough to filter toxins and allow urine to flow, an artificial way of filtering the kidneys, dialysis, can take over. Dialysis is not a cure though. Instead, it gives the doctors a way to clean the blood while trying to control everything else. 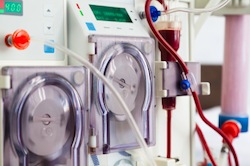 With hemodialysis, a machine called a hemodialyzer is the artificial kidney. A catheter (tube) placed into the patient’s vein leads to the other end of the catheter in the hemodialyzer. When the process starts, blood flows a few ounces at a time from the patient’s body to the machine. The machine filters it and sends the blood back through the catheter to the body.

People who receive dialysis are at risk of infection at the catheter site since the catheter is an invasive device. Therefore, it’s essential that they monitor the site for any signs of infection, like redness, swelling, skin warmer to touch, and fever.

How often and how long each procedure takes depends on how much kidney function still exists, patient size, and how much toxins have accumulated in the blood since the previous treatment. Dialysis can be intermittent (for three or four hours every or every other day) or continuous but at a slower rate.

In acute kidney failure, dialysis is usually a temporary measure as the doctors work to fix the problem that caused the kidney failure. If the kidneys begin to work properly again, even if not at 100 percent, dialysis can usually stop.

Some people need to continue receiving dialysis treatments if the kidney damage is too severe and permanent. Since dialysis is not a cure, they may be candidates for a kidney transplant if they qualify.

Some sepsis survivors continue to have problems with their kidneys, despite recovering from the sepsis itself. Doctors monitor their patients’ kidney function through regular check-ups and blood tests if there is lasting kidney damage.

Hi, My name is Lee and I’m a dog attack victim and a sepsis and septic shock survivor. I’m also a “DIC” and dry gangrene survivor. I have trouble comprehending why I am so blessed! (Sepsis and Animal Bites, Sepsis and Septic Shock, Sepsis and Disseminated Intravascular Coagulation (DIC) My story began on Christmas Day, 2021 on a normal, daily walk with my wife and my two dogs through our neighborhood park. It was a beautiful, exceptionally warm Christmas in North Carolina when we left the house around 4:00pm. We strolled down through the park toward the water and as ... Read Full Story

I contracted Covid-19 and I was 29 weeks pregnant. (Sepsis and COVID-19, Sepsis and Pregnancy & Childbirth) I had it pretty rough for two weeks and at 30 weeks pregnant I noticed decreased fetal movement and went to the hospital for monitoring. It was found that my son was no longer thriving in the womb due to placentitis of SARS COVID2, my placenta was abrupting and he needed to be delivered via emergency c-section within the hour. After he was born I was closed up and put in a room to recover before heading to a postpartum room. It was ... Read Full Story

Before last year I was very healthy and hadn’t taken a sick day in over 15 years. Outside of the occasional head cold or touch of flu I never got sick. Extremely active. Most of my career has been in the restaurant business in upper management frequently traveling. Avid outdoorsmen and for my 57 years in better than average condition. No previous hospitalizations (a few minor outpatient procedures) and not on any meds. I contracted Covid in Early August 2021. (Sepsis and COVID-19) Had a cough and general flu-like symptoms on Sunday. I tested positive on Monday. Worked from home ... Read Full Story

My mother entered the ER in March of 2017 for lower back and chills. Once she got there things changed quickly. She developed a fever and could no longer produce urine and was in incredible pain . She was diagnosed with kidney stones and the doctors suggested for her to go home and to just try pass the stones on her own. (Sepsis and Kidney Stones) My mom felt something was not right and insisted on staying at least over night for observation. The doctor agreed. When my mother got admitted onto the hospital floor, things took a turn for the ... Read Full Story John A. Ippolite, was an exceptionally strong man and father who was a true soldier in battle against numerous difficult, complex rare medical conditions. John was a colon cancer, sepsis, myelodysplastic syndrome (MDS) and asbestosis survivor. He battled hard against metastatic lung cancer caused by asbestosis for 18 months; but ultimately passed away from complications related to pneumonia, urosepsis and kidney failure. His superb hematologist, integrative medicine physician, gastroenterologist, kidney doctor and hospital and sub-acute medical professionals had been exceptional and instrumental in saving his life during his years of medical battles. (Sepsis and Pneumonia, Sepsis and Urinary Tract Infections) ... Read Full Story