Urine has no solids, but there are times when the crystals in urine join together to form a stone. Although there are several substances that can form stones, the four most common are made of: 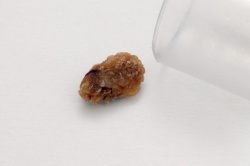 Your kidneys are the beginning or top part of your urinary system. Urine is filtered in the kidneys and comes down through the ureters into your bladder, one from each kidney. The urine is held in the urinary bladder until it is emptied, when the urine passes through the urethra and out the urethral opening.

A risk with kidney stones is a kidney infection, which can lead to sepsis. Sometimes incorrectly called blood poisoning, sepsis is the body’s often deadly response to infection. Like strokes or heart attacks, sepsis is a medical emergency that requires rapid diagnosis and treatment.

How do you get kidney stones?

While we don’t know what causes stones to form, we do know some stones form more easily than others. Dehydration, not consuming enough fluids, can contribute to stones forming, as there may not be enough urine to wash out the microscopic crystals.

Calcium stones, the most common kidney stones, seem to affect more men than women and they are most often in the twenties when it happens.

Although food doesn’t cause the stone formation, some people may be told to avoid high calcium foods if they are prone to developing stones.

Cystine stones are caused by a disorder that runs in families and affects both men and women.

Uric acid stones affect more men than women and they can also occur in people who already get calcium stones. People who have high uric acid levels may have or develop gout.

Some people don’t feel kidney stones until they start to move and try to exit the kidney. Some symptoms include:

What treatments are available?

Because of the pain caused by kidney stones, many people find that they need pain relief. Many describe it as the worst pain they’ve ever felt.

If you have a kidney stone, you will be encouraged to drink a lot of water if you don’t have a medical condition that limits the amount you may have. The extra fluid is to help wash the stone through your urinary system.

If the stone doesn’t pass within a reasonable amount of time, your doctor may recommend extracorporeal shock wave lithotripsy (ESWL).  Shock waves are sent through to the stone to break them down into smaller pieces that can be passed. Sometimes, surgery may be needed.

The stone should be removed because of the high risk of infection, which could – in turn – lead to sepsis.

Can kidney stones be prevented?

While not all kidney stones can be prevented, there are ways to lower your risk of developing one or developing another one. The first and foremost way would be to drink enough fluids to ensure your urinary system gets flushed out well.

Your doctor could recommend that you avoid certain types of foods, but that is an individual call. For certain types of stones, sometimes medications are prescribed to help reduce the risk as well.

1st February 2021 I had severe pain in my flank, I didn’t think much of it. The pain became unbearable so I rang 111 (the number to call for medical advice) only to be told to ring my GP. My GP told me to ring 999. Hours later paramedics arrived. I knew I had a kidney stone, the paramedics however believed it to be a slipped disc. (Sepsis and Kidney Stones) They wanted to me to go an out of hours GP but my heart rate was too high, so they took me to A&E. I waited hours in A&E, ... Read Full Story

2013 I was diagnosed with a kidney stone. (Sepsis and Kidney Stones) The ER physician told me not to worry about it. It was about the size of a dime and in an area where they don’t move from or grow. A year later, almost to the day I went to the ER again with kidney pain. Thank goodness I worked in a hospital at that time as I went to the ER on my lunch. The new MRI showed that the stone was now the size of a golf ball and had dropped. They called in a specialist for ... Read Full Story Friday August 3rd 2018, I awoke with horrendous back pain, which escalated throughout the day, including during a 3 hour drive, returning home from being on holiday. By the time I got home (I had been driving), I couldn’t stand, sit or lie down for more than a few seconds as my pain was excruciating. I couldn’t breathe very well. My partner called an ambulance, by which time I’d removed all my clothes, such was my fever. I got blue-lighted to A&E; was given maximum morphine in the ambulance and for the next 5 hours in A&E, I was on ... Read Full Story