My name is Marnie Doubek. I am a well respected family physician who has been in practice for over 15 years. This is the story of my son, a doctor’s son.

Zachary was 11 years old in the spring of 2014. He was a perfectly healthy, active and athletic boy. It all started on a Wednesday night. Zach had just played a double header baseball game. He had played well and I went to congratulate him. I was surprised to find him crying instead of smiling. He told me that his right knee hurt, he was dizzy and he had a headache. I didn’t think much of it. He was hungry, tired, must have hurt his knee while sliding. Probably the same things any parent would have thought. He went to bed without dinner and I figured he’d feel better in the morning.

He woke up the next day with persistent knee pain. I began to feel uneasy about his symptoms. He took ibuprofen and was able to go to school a little late but the school nurse called me a few hours later reporting that he was limping and he “just didn’t look right.” She had good instinct. I picked him up and shortly after he began to run fever. The fever was odd in that it didn’t respond well to typical fever reducers like Advil or Tylenol.

By the next day, Zach’s pain had increased. We brought him to his primary care physician who examined him and was concerned enough to do some basic blood tests. A few of the tests came back markedly abnormal, so Zach was emergently referred to a pediatric orthopedist. The orthopedist took an x-ray and even drew some fluid from Zach’s knee joint. In the end, both physicians agreed that he probably had a viral infection which was causing an inflammation of his knee joint. I continued to feel uneasy about his symptoms. I questioned whether they were really a result of a viral infection. I had never seen anything like it in my 15 years of being a physician or my 13 years of being a mom! Although my gut was telling me something was really wrong, I hesitated to act on my feelings. I didn’t want to be one of those “crazy moms.”

My husband and I let another day pass. Zach’s symptoms only worsened. He developed a red raised rash scattered all over his body. By Saturday evening, he was experiencing such severe muscle pains that he honestly couldn’t move. Any small movement of his limbs or neck made him cry. We literally had to carry our 110-pound son up the steps to put him in bed. I stayed with him in our bed that night. He was restless and kept asking for water. In the middle of the night he asked if “someone was going to fly the waterbottle to our house”. He was delirious and I was terrified. I ran to wake my husband and told him that we had to take him to the emergency room immediately. I told him that this was no virus!

In the emergency room Zach was found to be in multisystem failure. He was transferred to a pediatric ICU at another hospital. He was immediately started on broad spectrum antibiotics and oxygen but the doctors weren’t clear about what was happening. Within 12 hours Zach needed to be put on a respirator. The doctors and nurses worked endlessly to stabilize him and finally got their answer 2 days after he had arrived in the ICU. His blood was growing a kind of bacteria called MRSA or methicillin resistant staph aureus. (Sepsis and MRSA) It is an aggressive bacteria resistant to many standard antibiotics. Zach had MRSA sepsis. It turned out that the infection had started in the femur bone of his right leg and spread into his blood stream. Zach spent 12 days on the respirator and almost a month in the hospital. He had 6 surgeries on his right leg. He left the hospital and then spent 8 additional weeks in a pediatric rehabilitation facility regaining strength and mobility. (Sepsis and Children)

Today Zach is an essentially normal 13 year old. He has a few lingering complications of his illness including nerve damage which causes a mild limp. He can’t play competitive sports like he did prior to getting ill but he is lucky enough to be able to run around with his friends even playing football in the park. We are watching for issues with the growth of his right leg, but so far, so good.

I am a physician and I didn’t recognize sepsis in my own child. Know the symptoms of sepsis. Know that sepsis can happen to anyone. Trust your instincts. If you are concerned, seek medical attention sooner rather than later. In the end, we were very lucky. I have a new found appreciation for just regular every day life with my 3 healthy children. 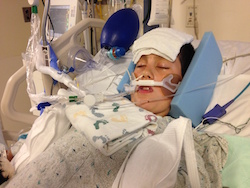