Erin was 23 years old and going to have a surgery that is very common, but that people don’t like to talk about, a hemorrhoidectomy. This is supposed to be a simple out-patient procedure that provides a lot of relief, so it was planned that she would have it. (Sepsis and Surgery)

The surgery went as planned and Erin was discharged home into the care of her parents. Because there would be pain, Erin was prescribed Vicodin to manage it. Her doctor was going out of town, so she was given the covering surgeon’s contact number in case there were any problems.

Erin began experiencing more pain, so her mother called the doctor for something stronger, but he wasn’t in his office and she was told that they would have to contact another doctor. A friend, a physician, prescribed a stronger injected analgesic (pain killer) and his wife, a nurse, administered it. 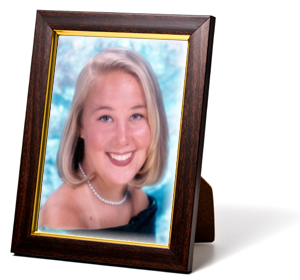 Two days later, instead of the pain getting better – it got worse. This wasn’t supposed to happen, so Erin’s mother drove her to a local hospital – not the one where the surgery was done – to have Erin checked. The emergency room doctor noticed that Erin’s white blood cell count was higher than it should be – in fact, it was double. This usually indicates an infection and since Erin recently had surgery, this would make sense. But, [glossary]antibiotics[/glossary], the treatment for infection, also may cause diarrhea, so the doctor decided that it would be best not to give them. Instead, Erin was given a cream to apply. The Flatleys didn’t learn about this blood test result until after Erin died.

The pain wasn’t getting better – Erin rated it the highest on a scale of 1 to 10. She was having problems urinating and had to be catheterized and at one point, her urine began to look cloudy. Her abdomen became puffy. It was time to go back to the hospital.

Once back at the hospital, Erin wasn’t considered to be an urgent case. Blood tests showed very high white blood cell counts and the doctor thought Erin may have a kidney infection and she was finally prescribed an antibiotic. This medicine was not given to Erin for hours. And then Erin waited for a CAT scan. And waited. Although she was hungry and thirsty, she wasn’t allowed to take anything by mouth because she hadn’t had the scan yet. Erin began shaking and thrashing about.

Another doctor saw Erin and ordered three more antibiotics but five hours later, they had not yet been given to Erin. Erin’s dad could see there was something wrong when he came to visit. Erin’s heart rate was high, her blood pressure was low. It was at that point, when Dr. Flatley insisted that the doctor come in that he heard that he thought Erin may be “septic.” They were told she could die.

Three a.m. the next morning, the Flatleys called the hospital from their home, where they had gone for a quick nap. They were told that they had better come. Erin’s sister came a bit later and when she left the room for a few minutes, she heard a Code Blue in the ICU. It was for Erin.

Erins’ story was reported in the St. Petersburg Times.

Read about Erin’s Campaign for Kids.