Liver disease is an umbrella term for many diseases that affect the liver, the largest organ in your body. It’s on your right side, just under the bottom of your rib cage. Your liver plays an important role in your survival and you must have a liver to live, although you may be able to live with a partial liver. The liver actually has the ability to regenerate or grow back if not too much of it is damaged or removed. 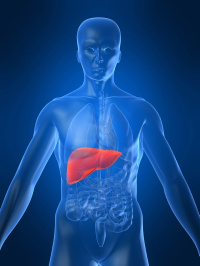 Your liver processes or breaks down (metabolizes) many chemicals including nutrients, alcohol, and many drugs. It also:

Certain liver diseases, such as cirrhosis of the liver, can increase your risk of developing and infection and sepsis.

What is cirrhosis of the liver?

In cirrhosis of the liver, the liver tissue begins to break down or deteriorate. Scar tissue then replaces previously healthy tissue. The scar tissue doesn’t allow blood flow through to the still healthy parts of the liver.

The damaged parts of the liver may regenerate in the early stages of the disease.However as the damage increases, the liver’s ability to fix itself drops until it can’t do so any longer.

How do you get cirrhosis of the liver?

As with many other illnesses, cirrhosis of the liver doesn’t often show early symptoms, so you could have it in the early stages and not know. Once symptoms do begin, they include:

There is no cure for cirrhosis of the liver but it can be managed if the damage to the liver tissue isn’t too severe. Lifestyle changes may prevent further progression of the disease and medications may treat symptoms or complications caused by the cirrhosis.

Some types of cirrhosis of the liver can’t be prevented. But the type that caused by long-term alcohol abuse or drug abuse can.

To avoid developing hepatitis, ensure you have up-to-date vaccinations for hepatitis A and B. Healthcare workers must receive hepatitis vaccinations because of their frequent exposure to possibly contaminated body fluids.

Hepatitis C does not have a vaccine, but can be prevented by: I found my beautiful mother in respiratory arrest on March 25, 2017. She was rushed to the hospital where she was diagnosed with severe septic shock. I remember seeing her on the gurney, begging her to stay with us and slow her heart down (it was racing in the 200s). The hospital she was at transferred her to a larger hospital where she was put in the ICU and given less than a 25% chance of survival. She spent 4 days in a coma and then started coming around. She beat it!!! I should also state that she was in ... Read Full Story Hello, my name is, Andrew… One of four children in my family… Carl, 35 (Older Brother); Deb, 33 (Older Sister), Andrew, 24 (That’s meee!); and then… well then there’s, Cerri… The youngest in the family, the baby and the one we’re all s’pose to protect. Let me tell you what happened to Cerri… Cerri was a 20-year-old girl who had congenital hepatic fibrosis and polycystic kidneys. She had previous drainage of a vulvar abscess and a pubic abscess in the weeks prior to her final admission to hospital. On 2nd September 2010, she was admitted to the RLH ( Royal ... Read Full Story

Liver disease is an umbrella term for many diseases that affect the liver. The liver is the largest organ in your body. It’s on your right side, just under the bottom of your rib cage. It plays an important role in your survival and you must have a liver to live, although you may be able to live with a partial liver. The liver actually has the ability to regenerate or grow back if not too much of it is damaged or removed.